No Harry Potter Camp would be complete without everyone's favorite wizard sport: quidditch. This combination of rugby, dodgeball and tag is confusing and very hard to referee, but also exciting! Because you get to carry a broom, like a real wizard! My campers were eager to play quidditch and I was surprised at just how seriously they took the sport and how much they wanted to win. That girl who came to camp dressed in Harry Potter official licensed attire and brought her own Hedwig? She's out for blood. Beware.


There are many ways to play quidditch, and if you look around the internet, you're bound to find all sorts of variations. Some involve pool noodles as brooms. Some involve frisbees as golden snitches. Heck, there's a United States Quidditch organization that has created a 200+ page rule book and has member teams from many colleges and universities, in addition to youth and adult leagues. There are many ways to play quidditch, so you'll want to do some research and figure out what works best for your audience. Our setup relied heavily on the rules outlined by USQ, but we also made some adaptations to better suit the middle school age group.

We played quidditch four out of the five days and alternated which houses partnered together for competition. I didn't want anyone just sitting on the sidelines watching, so it was always 2 houses v. 2 houses. 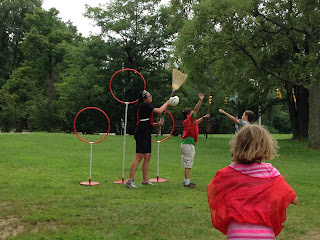 Note: You may be looking at my photos and thinking "These are terrible photos! I can't see anything!" Sorry about that from a documentation perspective. I didn't want to post any photos of campers that showed their faces. Gotta respect their privacy.

Materials
1 Broom for each fielder
2 Keeper Brooms (larger and thus better for blocking)
2 Quaffles (not fully inflated, but not totally deflated; somewhere in between)
4 Bludgers (some people use dodgeballs, some kick/playground balls; we used knobby balls)
1 Yellow Jersey (and, if you like, 1 yellow sport sock with a tennis ball inside)
Jerseys (or some other identifier) for at least one of the teams, if not both (we had one team wear red)
6 Hoops (or you can use hula hoops and duct tape!)
6 1.5" PVC pipes in the following lengths (two of each): 2'9"  4'3" and 5'9"
Orange Cones (to demarcate the playing field, if necessary)

*You may also consider colored sweatband headbands for players that indicate which position they play. We didn't do this, but might next year. It gets seriously confusing and crazy on the pitch.

**Another thing you may want to do is buy brown duct tape and wind it on down the handle of the straw brooms, all the way to where the straw attaches. Give it a few extra spins at the point where the straw connects too. This will help prevent the bamboo from breaking and keep the straw part from falling off. 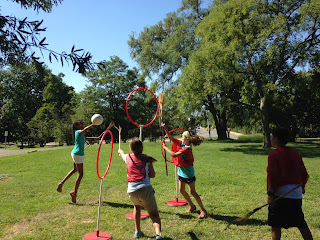 Game Setup
The easiest place to play quidditch is on a basketball court, because it already has lines. We didn't have that luxury and were instead out on a big grassy field. We marked the corners and center line with cones and then set up 3 hoops on each end. Along the center line, we placed our quaffles and bludgers. Our field was probably about half the size of a soccer field, and it worked pretty well for our age group. With three adults, we could each kind of keep everything in sight. Kind of.

You'll also need to designate someone as the Golden Snitch. This person is a neutral party and wears the yellow jersey (and if you're using the sock with the tennis ball, tucks that into his/her waistband). We had our referees serve as the snitches and they took turns donning the yellow jersey and running around on the field trying not to get caught at various intervals. 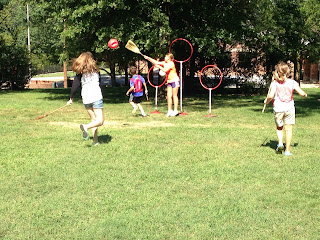 Gameplay
When the game began, all players started on their sides and had to run to the center to get the quaffles (offense) and bludgers (defense).

I can't say it better than USQ, so I'll just quote them:


Three chasers score goals worth 10 points each with a volleyball called the quaffle. They advance the ball down the field by running with it, passing it to teammates, or kicking it. Each team has a keeper who defends the goal hoops. Two beaters use dodgeballs called bludgers to disrupt the flow of the game by “knocking out” other players. Any player hit by a bludger is out of play until they touch their own goals. Each team also has a seeker who tries to catch the snitch. The snitch is a ball attached to the waistband of the snitch runner, a neutral athlete in a yellow uniform who uses any means to avoid capture. The snitch is worth 30 points and its capture ends the game. If the score is tied after the snitch catch, the game proceeds into overtime. (https://www.usquidditch.org/about/rules/)

We found that having the snitch end the game was anti-climactic and disappointing. We made it so though it was worth more points, it didn't end the game. Catching the snitch was more an opportunity to win bonus points and give the Seekers something to do. Otherwise, being a Seeker is really boring. 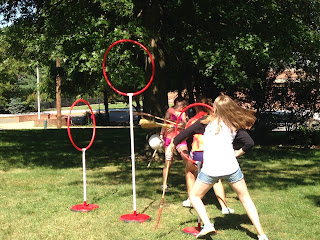 Penalties
Be very clear about this one thing before you start: THE BROOM IS NOT A WEAPON. If a player uses the broom to strike or block another player or ball (except the Keeper, who may block), they receive a penalty and must sit out for 60 seconds. If they do it a second time, they sit out 5 minutes. A third time = ejection from game. And probably a cal home. You don't need that.

Ending the Game
We weren't official about this at all. The actual amount of playing time varied each day, based on the heat (needed to make sure kids were hydrated and not playing outside too long on the terribly hot days), whether it was an evenly matched event or a total blowout (tried to end the blowouts faster), and how well everyone was getting along. Friendly competition = good. Hitting an opponent with your broom = bad. 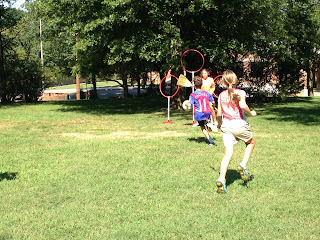 Phew! And there you have it. Quidditch! This post took forever to write. I hope it's helpful. And if I left anything out, let me know and I'll add in detail.

The LibrariYAn is an Amazon Associate. If you click from links on this blog to Amazon and buy something (anything!), I receive a small percentage of the purchase price.
Posted by Alicia at 8:00 AM